Hope turned 11 on June 13th!  She was really into Cat Warrior books series, so she got two sets of different ones.  She also wanted cat cupcakes.  I ordered little plastic cats to go on top of the cupcakes, but they never came in.  I looked all over Montgomery for plastic cats and found three!  At least there was for each child!  Hope was fine with it.  Natchi had surprised her with her name written in balloons.  Hope loved it!  Viola also sent Hope some Dragon gifts.  Natchi took Hope and two friends to Rockin Jump, Moes and to Nancy's Ice.  That night, we went to Kobe's for Japanese food.

Will turned 11 on Sept. 7th.  Will makes his birthday quite an event in which I think everyone must know about it weeks in advance:).  He reminded us everyday for about 10 days how many days were left until his birthday.  He just gets so excited!  He loves every gift, card, and phone call!  His birthday was on a Friday this year, so I bought them all Chick-fil-A biscuits from school - Will said that would be a good idea since it was his birthday - I agreed!  After school, we went to the lake and he wanted to eat at Oskars so he could have their cheeseballs!  Then he opened his presents at the lake and was so excited about everything!  Then we had cake!  Whew, he still has Viola's gift to look forward to that will be coming in the mail soon.  He also received a very special card and gift from a special teacher at Eastwood:)

Lena turned 8 on September 11.  She shares this birthday with her cousin, Taylor, and Pastor Jay!  Lena is much more low key about her birthday than Will (thank goodness)!  She woke up to a sparkly Happy Birthday banner in the kitchen and a princess banner to wear.  She chose to eat at Panera Bread, because she loves their mac and cheese!  Beth came a few days after her birthday and gave her a complete make over including hair!  Lena loved it!  She loved all of her gifts.  Gifts from Viola came later .  Natchi gave her the new Baby Alive doll and Mimi and Pawpaw gave her Baby Alive clothes.  She had a great birthday! 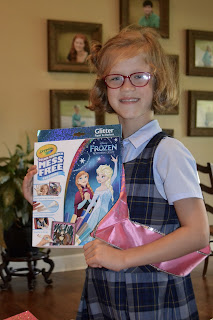 Tanya Birchfield
We adopted Hope from Moldova in May of 2009. We also have two older children: Dow and Beth. My husband is an attorney and I am a stay at home mom. We are very active in our church and our childrens' activites